Making progress on the big painting. The guy definitely needs more work. Eek. Funny how different they look in a small photo.

No matter how many times I walked a way from it I didn’t notice it. Hmm I was tired. I think everyone in the studio had spring fever. Nobody stayed late painting like we usually do.

So why use artist grade besides they will last forever. The pigment load is higher.  That means you get more intense color with less paint. You can actually use more paint when you use the cheaper student grades to get the color you want and you may never get intense color.

It’s a HUGE rehabbed old Sears building on Ponce de Leon near the Whole Foods and Trader Joe’s. Whoever designed it kept much of the funkiness of the old building keeping the floors and the huge support columns and the ibeams in the floors.

The two panoramas give a 360 degree view of the space which is jammed packed with the smells of the 20 plus upscale chef run restaurants that allow you and your friends many delicious choices of food which you eat in the open areas.

Outside eating area is a huge interesting place called the Shed which is an enormous concrete beam structure surrounded by restaurants ok one side and stores on the other. I think it’s new construction but not sure. I really need to sit down and draw it becAuse it’s wonderful to look at.

The store side of the Shed.

Sunday there is an art market in the shed. Going to check that out tomorrow but since it’s Easter thinking it’s not open. 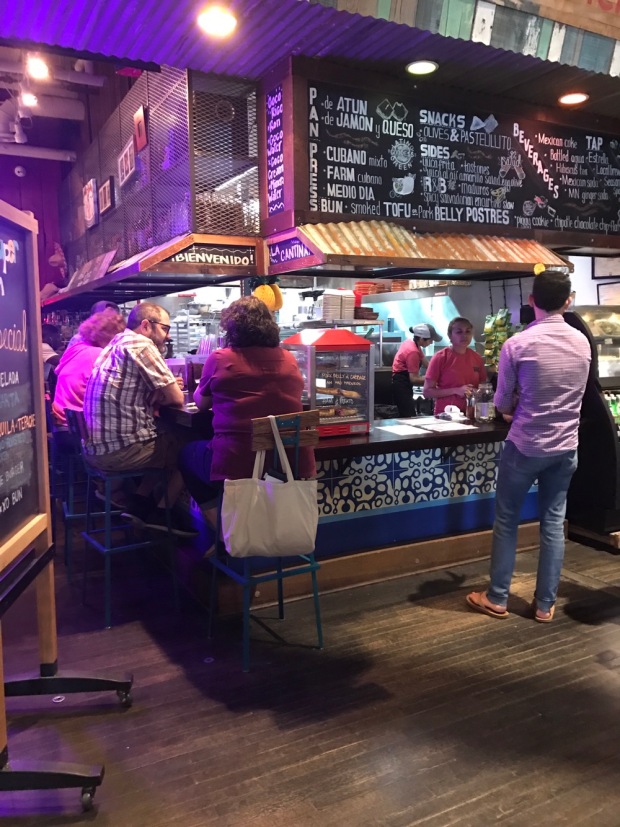 Keep taking photos of a few places that just appeal to my eye. This Caribbean food place El Super Pan  is just delightfully funky with its purple lit metal overhang. Someplace I have an unpainted sketch of this place. 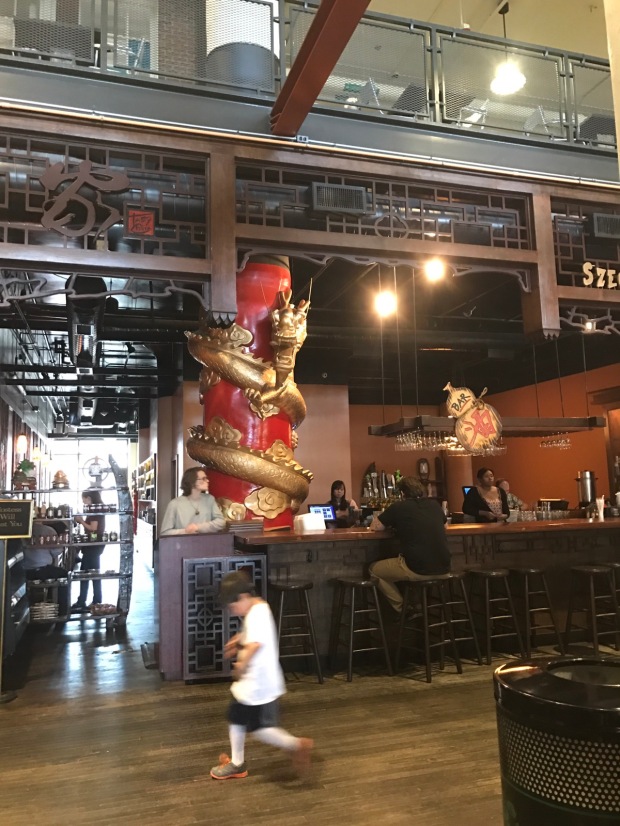 And my favorite golden dragon Chinese restaurant.  I have painted this twice. Love that dragon.

This couple sat down inches from me at the same table Aron f one of the columns between me and the object of my attention. The golden dragon column. Yes there were other tables to sit at but no they had to block my view.  Irritated with the self involved duo I snapped their photo and immortalized the French Fry couple.

Here’s the sketch I had been doing. 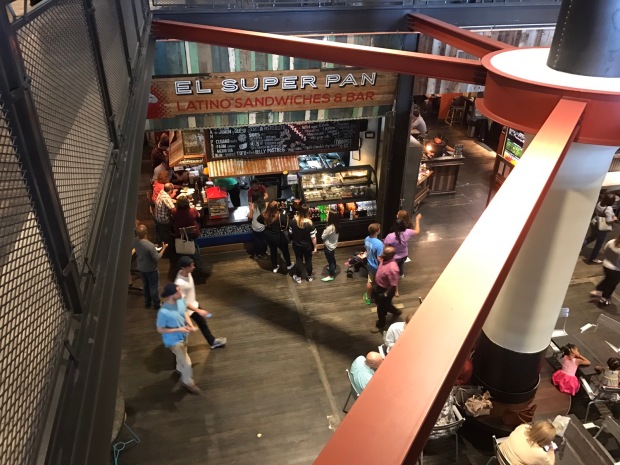 I love going upstairs and taking photos of the first floor over the railing.

That’s how I snapped the photo for this painting called Looking Down which was recently juried into the Anderson Center for the Arts Show which is considered a coup in South Carolina.

One of the appeals of Ponce city Market besides the delicious food are the masses of people and the odd interesting architectural elements like the large yellow and black arrow in the upper right. 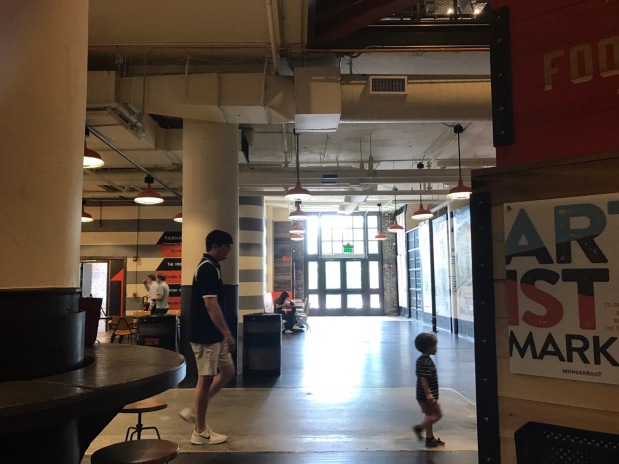 I think you could find a life time of paintings on the environs of PCM aka Ponce City Market. Something about this one. The two guys one big one little trudging off across the light from the doors.

Sooner or later I will get a food pic of this bar. Maybe on my big camera not my phone. I have two hundred or so photos there.

Trying to resist the lure of PCM today a Sketchers paradise but there are eggs to dye and Easter prep to be done.

Margaret loving Atlanta even when it took me an hour and 15 min to drive 4 miles  from Trader Joe’s to the house. Xoxoxo

Repainting the tshirt sketch as promised. Hope to deliver it Tuesday to Rhineharts.
Letting the ink dry so no smears on it. Ink smears are so annoying and so unpredictable. A kin to letting paint dry!!!
I usually don’t use pencil but since it’s a redo of the original sketch which has a split page from the sketchbook it’s a necessity if the restaurant is to have it.

Aka Ponce City Market which no doubt u have noticed I am in love with.

Today I meant to paint the PCM sketches watercolored but spent it cleaning the house, the garage, and hauling a mattress up  three stories after stuffing it in a Prius creating a new guest bedroom. Let me know if you want to rent it. It does have a river view. Still have to hang the pictures but doesn’t it look cozy?! And yes I made those quilts.

This originally posted on that other domain I have so reposting it.

Dragon is Quin gold and pyrrole red.
Ponce City Market has an amazing food court similar to the mall but all upscale restaurants that are so good they were recently on CBS Morning News.
Ponce City Market was an old Sears building that has been repurposes as a shopping mall with condos on the upper floors. All Atlantans remember it as the Sears across from the old Atlanta Crackers field where Ty Cobb played. 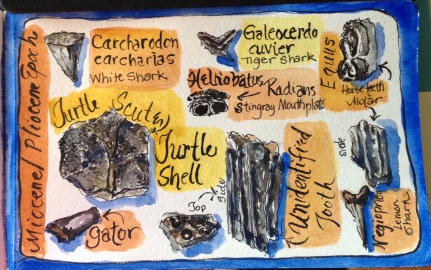 Fossils (Print will be available)

Out My Back Doo5 Watercolor Prints will be available soon 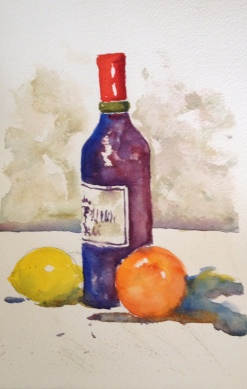 Out My Back Door Watercolor Prints will be available soon

Ellie For Sale Watercolor Half Sheet 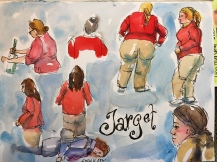 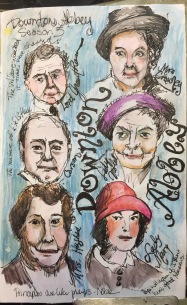 Out My Back Door4 Watercolor Prints will be available soon

Abalone (Print will be available) 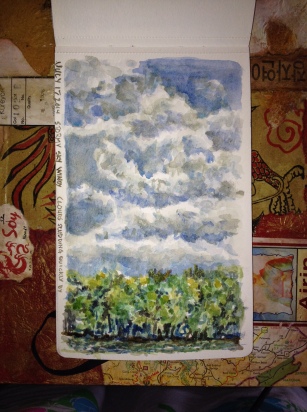 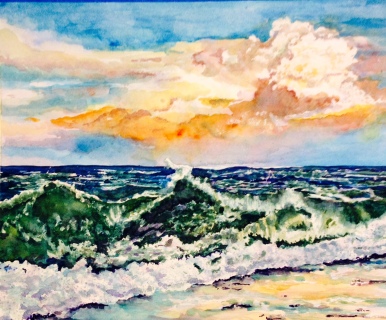 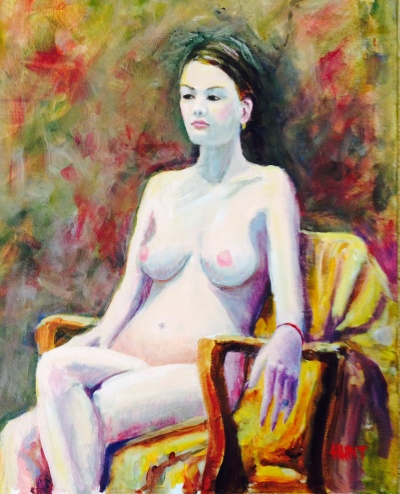 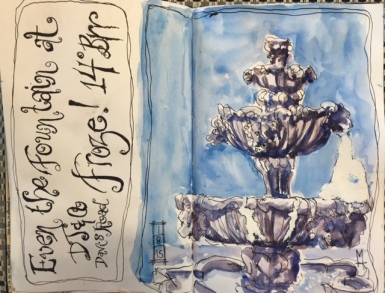 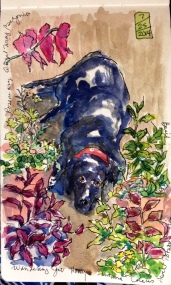 Oxford Prints will be available soon 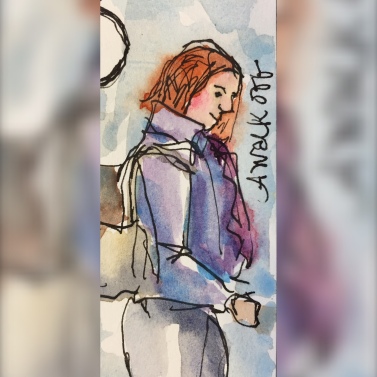 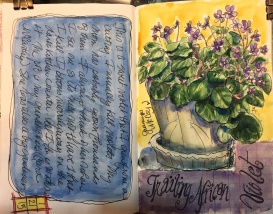 Sharks Teeth (Print will be available)

Out My Back Door3 Watercolor Prints will be available soon

The Fountain III For Sale! 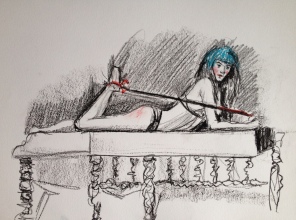 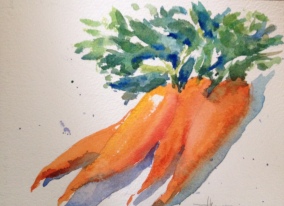 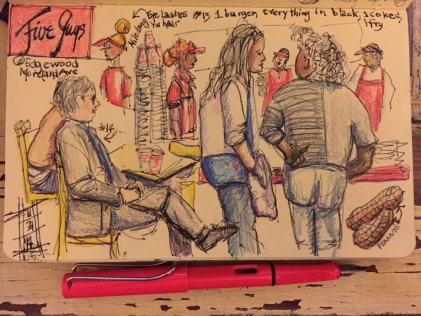 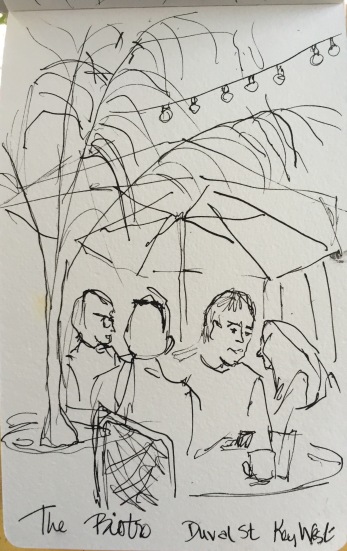 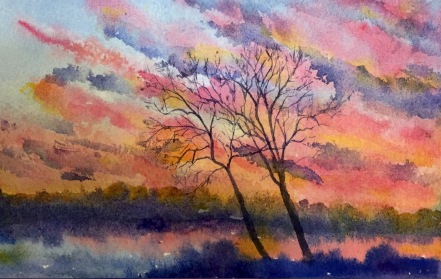 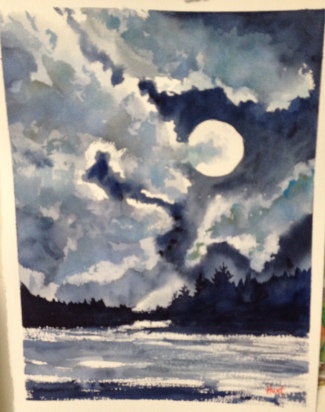 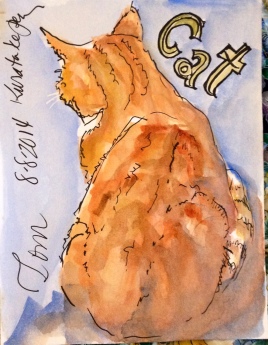 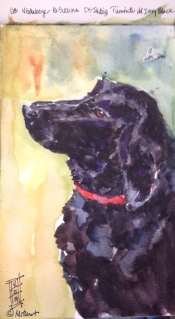 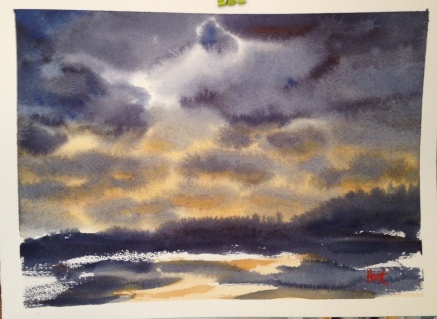 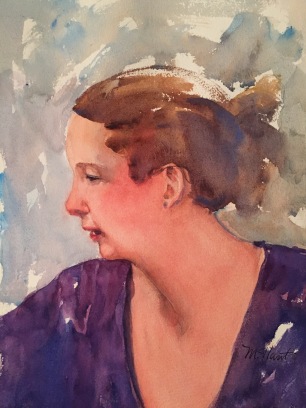